A project that will see public sector buildings kept warm by green heat produced in the Tees Valley has today been officially launched by Mayor Ben Houchen.

The Mayor and the Tees Valley Combined Authority have led the development of a £40million Middlesbrough District Energy Network scheme, focused around the town centre.

The scheme could use some of the waste heat from local industry to warm public sector buildings, delivering energy savings and significant carbon savings while reducing energy costs.

The Tees Valley has been awarded £218,000 from Government to help bring the scheme forward.

Middlesbrough’s James Cook University Hospital will be the first complex to benefit from the district heating project. Over a 40-year lifespan, the project is expected to save the hospital a significant sum on its energy bills, and around 8,000 tonnes of carbon per year.

The project, to be delivered in partnership with the NHS Trust, Teesside University and Middlesbrough Council, is now entering the procurement stage for a contract to construct and operate the scheme. This could see pipes in the ground in the next two years.

Tees Valley Mayor Ben Houchen said: “District heating might not mean a great deal to many, but it will help reduce our carbon emissions and save our vital public services money on their energy bills.

“This scheme could save the NHS a tonne of cash on heating, which would then be invested in front-line patient care. It’s a win-win for business, taxpayers and the environment.

“We’ve seen countries such as Denmark take advantage of these schemes and all of the benefits they bring. This is yet another step in our ambitious drive to become a high-wage, low-carbon economy.”

Siobhan McArdle, Chief Executive, South Tees Hospitals NHS Foundation Trust, said: “We’re leading the way in the NHS when it comes to energy saving and environmental improvements, and this proposed heating initiative will not only help us deliver long term sustainability, but deliver financial savings that can be re-directed to providing care to our patients.” 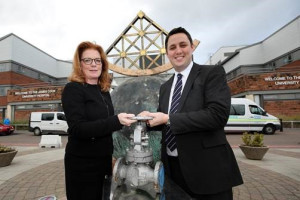 Picture caption: Siobhan McArdle, left, and Ben Houchen at James Cook University Hospital, holding a valve similar to the type that will be used in the district heating scheme.