Take That Set For Tees Valley 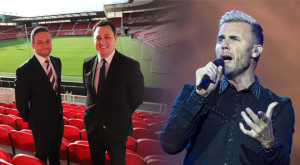 Middlesbrough Football Club have today announced a major coup by welcoming Take That to the Riverside Stadium in June 2019.

The chart-topping band will headline the Riverside’s first major music event on June 1 and they will be supported by the legendary Rick Astley.

MFC’s Head of Commercial Lee Fryett said: “Part of the club’s long-term vision is for the Riverside Stadium to be used as a venue to host world class events, and this is a real coup for us.

“We’re working closely with the Tees Valley Combined Authority and Middlesbrough Council to bring a world class events to the Tees Valley region, and their support, along with that of SJM, has been terrific.

“As a football club we believe passionately in this region and we want to promote Tees Valley on a world stage. We are looking forward to welcoming people from the Tees Valley and beyond and ensuring everyone has a fantastic experience of both the Riverside Stadium and the region.”

Tees Valley Mayor Ben Houchen said: “This will be one of the biggest concerts to take place next year – and it’s happening right here in Middlesbrough. Thousands will come to the town, spend money, buy local and help to put the Tees Valley on the map.

“Hats off to Middlesbrough FC for getting this over the line. It highlights our ambition to host big events and bring massive music acts and even more visitors to the region.

“A couple of years ago we wouldn’t have had the confidence to do this. Now we’re bidding for a Rugby League World Cup, bringing the Great North City Games to Stockton, and now Take That are coming to Boro.”