From household-name companies to hugely popular sporting events, the past three months has seen big things afoot across the Tees Valley.

Stobart Energy is the latest instantly recognisable brand to come to our region and seek to call it home. This enthusiastic support from a massive player in the UK biomass sector goes some way to recognise that we want to be an industry leader and the country’s energy powerhouse.

Moving from business to culture, we have also secured the Great North CityGames, which will be moving from Newcastle to Stockton next September. Following our bid to host games and a team for the Rugby League World Cup 2021, which has moved past the first phase to the Candidate Stage, this is a fantastic coup for sports fans and the wider tourism sector.

All of this continues to show we’re a region on the up. Not too long ago, we would not have been confident enough to bid for the biggest sporting events and may have been passed up for business opportunities.

To direct our decision-making in taking advantage of all that the private sector offers, we need even more engagement with the diverse business leaders in our region.  That’s why we’ve launched a new drive for LEP Board members, to increase representation and to have a more diverse LEP by 2020

By continuing to talk up Tees Valley we are, more than ever, growing in strength and having our transformational messages heard.

A world-class athletics event is set to move from NewcastleGateshead’s Quayside to Stockton in 2019 for the first time.

Over the past ten years, the Great North CityGames has gone from strength to strength and will be held in its new location on Saturday, September 7 next year.

The games, staged as part of the Simplyhealth Great North Run weekend, are broadcast on BBC1 and have attracted world-class athletes including Mo Farah, Dina Asher-Smith and Greg Rutherford.

It will form part of an action-packed sporting weekend across the North East, taking place on the same day as the new Simplyhealth Great Tees 10K, with its own Junior and Mini runs.

The event is being brought to the Borough thanks to a partnership between the Combined Authority, Great Run Company and Stockton-on-Tees Borough Council.

Rugby League World Cup 2021 Bid Gets to Next Stage

A bid to see Tees Valley host games and one of the leading nations during the Rugby League World Cup 2021 has been submitted, with the application now through to the second stage of the process.

Matty Lynn, from the Tees Valley under-16s rugby league team Yarm Wolves, kicked a rugby ball “over the Transporter Bridge” to launch the bid in July.

He was joined by representatives from the group behind the application, including Middlesbrough Mayor and Combined Authority cabinet member for culture Dave Budd, Mark Ellis from Middlesbrough Football Club and Danny Brown, Director of Rugby at Mowden Park.

In August, it was announced that the bid had reached the Candidate Stage of the decision-making process, meaning experts from the Rugby League organisation may carry out site visits of key venues.

If successful, the bid could give the region an economic boost of up to £8million, attracting tourists from across the world to the area. A final decision is expected to be made in January 2019.

Plans To Bring Hydrogen Trains, Cars And Buses To The Region Take A Step Forward

A major scheme to help transform Tees Valley into a UK-leading hydrogen powerhouse has been awarded £220,000.

The Combined Authority and partners will submit a bid to Government’s Office for Low Emission Vehicles to bring a fleet of hydrogen road vehicles and new refuelling infrastructure to the region.

If successful, the bid will unlock up to £40million to develop new refuelling stations across the Tees Valley, allowing cars, buses, bin lorries and even trains to be powered by the emission-free super fuel.

Mayor Houchen signed off £140,000 to develop the bid and also secure a partnership with TWI. The Middlesbrough-based engineering firm has also pledged £80,000 to bring “unparalleled expertise” to the region, needed to develop the area’s wider hydrogen economy aspirations.

Figures from a draft report commissioned by Combined Authority and produced by KPMG suggest that exploiting the opportunities of the hydrogen economy could add up to £7billion to the region’s economy between 2018 and 2050, with the creation of up to 1,000 jobs. 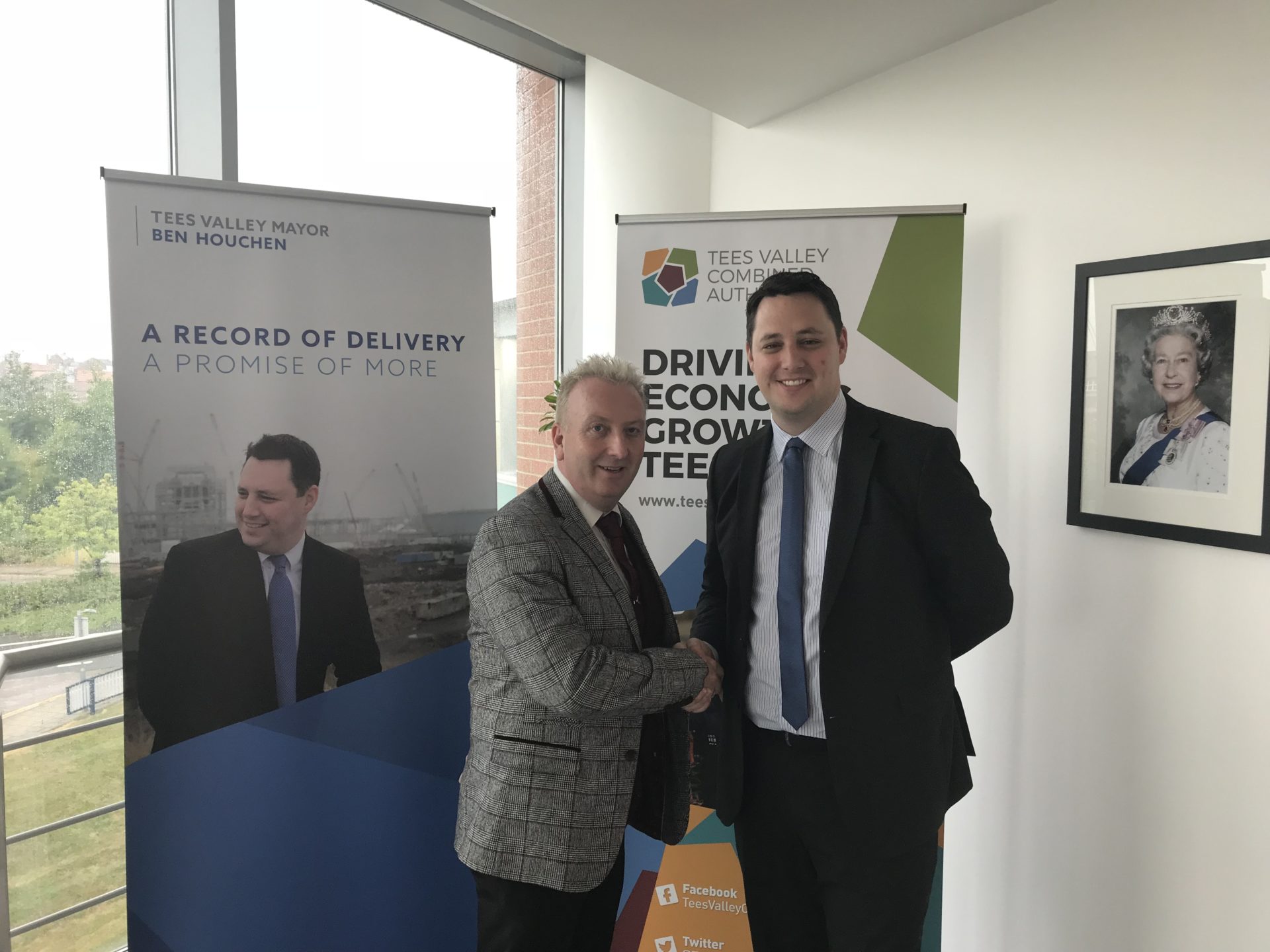 At a meeting of July’s Combined Authority Cabinet, it was agreed to invest the cash into the £18million scheme, which will create a bypass for the village of Elwick and deliver an upgrade to the current Elwick North junction to the A19, giving a third route into Hartlepool.

It would also assist in the building of around 1,500 new homes to the west of Hartlepool, leveraging at least £200million in private sector investment into homes, infrastructure and facilities.

The scheme would relieve pressure on existing access points to allow them to support economic growth elsewhere, such as the Port and three Enterprise Zones.

Funding from the Authority, to be delivered from 2019 to 2021, joins investment of £9.65million from Hartlepool Borough Council. The Combined Authority will also work alongside Homes England to secure a further £4.18million funding to drive the scheme forward.

A total of 40 direct jobs will be created at the facility, which is supporting the Combined Authority’s plans to secure opportunities in the growing renewables sector.

The 16-acre multipurpose site is based at Port Clarence and when running, the wood management site will receive two shipments per week of up to 5,000 tonnes of renewable fuel.

A senior Treasury minister responsible for economic growth in Tees Valley has visited the South Tees Development Corporation site to learn about the area’s opportunity for local people.

Robert Jenrick MP, Exchequer Secretary to the Treasury, met Tees Valley Mayor Ben Houchen and members of the Development Corporation board in August, where he learned of the 25-year vision to create 20,000 jobs and drive an additional £1billion per year into the local economy.

Mr Jenrick is the latest Treasury minister to travel to the site of the former SSI steelworks and throw his weight behind the project, after a visit by Liz Truss MP, Chief Secretary to the Treasury, in June.

It also follows an important intervention by the Chancellor of the Exchequer Philip Hammond MP who awarded £123million for the site and corporation in last year’s Budget, and whose letter to the Governor of the Bank of Thailand played a “crucial role” in laying the groundwork for negotiations with the Thai banks to secure the land.

In May, a delegation representing the Development Corporation, including Chair Mayor Houchen, Vice-Chairs Cllr Sue Jeffrey and Steve Gibson and board member Paul Booth attended the talks at the British Embassy.

There, the agreement in principle was signed with the three Thai banks who hold an interest in the former SSI site. Subject to approval, the deal will start the process of returning the land to local control. Compulsory purchase proceedings have begun in parallel, however it is hoped these will not have to be used.

Two of the biggest events in the Combined Authority calendar have been held at Teesside University.

More than 100 firms exhibited at Business Summit, which also saw over 1,000 business leaders, owners and managers attend, for a day of workshops, networking and presentations.

At the Skills and STEM event, more than 50 employers and learning and guidance providers spoke to 1,500 of the region’s 14 to 18-year-olds to inform them about the world of work.

The event included some of the region’s biggest employers, including Sirius, the Royal Navy, EDF Energy, BT and Jacobs, who sat alongside colleges, universities and training institutions.

New Drive to Diversify LEP Board

The dedication of our LEP Board is second to none. It is a fantastic, growing team made up of some of the best and brightest that the Tees Valley private sector has to offer.

It was described as “a fantastic example of public-private sector partnership, the strongest and most ambitious in the country” by Paul Drechsler CBE, President of the Confederation of British Industry (CBI) and Chancellor of Teesside University.

The one thing I’ve learned in my years helping lead some of the region’s biggest businesses is that no matter how well you think you’re doing, there’s always room for improvement.

That’s why we’ve launched a new recruitment drive, with a view to make the LEP as active and representative as it can possibly be. That means a make-up that truly reflects the diversity of our businesses in terms of geography, size and sectors, but also gender and ethnicity characteristics.

I’m asking representatives from businesses across the region who feel that they, or the work they do, adds real value to Tees Valley to put themselves forward and help create the most broad, varied LEP yet.

To find out more or to apply, click here.

On 23rd July Government announced that Tees Valley would be in Wave 2 for the development of Local Industrial Strategies. The Combined Authority will work with Government over the next ten months to prepare and agree the Tees Valley LIS.

Local Industrial Strategies will identify local strengths and challenges, future opportunities and the action needed to drive productivity. In doing so they will represent shared interests and needs of private, public and third sectors. They will set out a collective, shared long-term course and identify strategic priorities based on robust and transparent evidence.

An officer steering group has been established to develop the strategy and work is under way assessing our evidence base and identifying the gaps in evidence required. We are proposing to hold a series of cross-cutting and sector-based workshops to review the existing evidence base and to consider the interventions that are required to unlock productivity growth across the five drivers of productivity (Ideas, People, Infrastructure, Business, Environment).

The conclusion of a Government review of Local Enterprise Partnerships (LEPs) was published on 24 July 2018. The recommendations are centred on strengthening the role of LEPs, particularly clarifying roles and responsibilities; ensuring leadership and organisational capacity; being clear on accountability and transparency and addressing the issue of overlaps in LEP geographies.

Government has been in communication with Tees Valley LEP to outline the requirements for the review implementation plan, and initial discussions have taken place at a LEP Board briefing. A detailed implementation plan will be developed in consultation with the LEP Board and submitted to Government by 31st October 2018. All LEPs must provide a statement on proposals regarding geographical boundaries by 28 September 2018. The Tees Valley submission will confirm the relevance of the existing Tees Valley geography, as a functioning economic area.