Mayor Ben Houchen today (8 May) wasted no time in getting back to the job following his re-election as Tees Valley Mayor, driving forward the regeneration of the Teesworks site.

The Mayor was joined by representatives from Volvo and local firm Hall Construction to welcome a new £1million, 95-tonne excavator – one of only three in the country and the first in the North – bought by Hall from Volvo to speed up land preparation works.

The monster digger will be used alongside 75, 48, 25, and 5-tonne diggers to help develop land at South Bank, where GE Renewable Energy’s state-of-the-art wind turbine blade factory will be built. Up to ten people will join the 40-strong team, working six days a week to move more than 1.5million cubic metres of earth by the end of the year.

GE Renewable Energy’s 60,000sq ft facility will create 2,000 jobs during construction, with 750 more when complete and 1,500 in the supply chain as it manufactures blades for Dogger Bank wind farm just 80 miles off the coast. The first blade is expected to roll off the production line in 2023.

The manufacturing centre will sit alongside a new port and heavy lift quay also being created at Teesworks, making it the UK’s premier location for offshore wind.

Mayor Houchen, who was re-elected yesterday, said: “There’s no time to waste on the mammoth task of getting this land ready for the incredible opportunity that GE Renewable Energy’s new facility provides.

“We struck the deal just a couple of months ago, bringing them to the region ahead of another site in France as a direct result of securing the UK’s biggest Freeport for Teesside. This new, huge digger and getting more boots on the ground to work around the clock are showing how we’re going further faster to get the site into shape as soon as possible.

“Once the site is cleared, we can then get on with creating thousands of good-quality, well-paid jobs for local people in construction, and then hundreds more when the facility is up and running, another step toward realising our clean energy potential.

“We can’t rest on our laurels. The people of Teesside, Darlington and Hartlepool have voted for delivery and getting the job done and that’s exactly what I intend to do. Over the next few years, I’ll be pushing harder than ever to secure even more investment at Teesworks – and across our region – to fulfil our fantastic potential.”

Robert Hall, Director of Hall Construction, said: “This is a big project which is hugely important to the future of the site. That’s why we’ve brought in this new, top-of-the-range 95tonne excavator on top of the 40 machines we’re already using, and are drafting in more local workers to get the job done properly and efficiently.

“We’ve already cleared around 400,000 cubic metres of earth, but there’s plenty more to get done. We’re happy the Mayor could join us in welcoming the digger to site and see first-hand the progress we’ve been making up to this point.”

When complete, it is expected the South Bank area of Teesworks will house up to three manufacturers to support the development of the next-generation of offshore wind projects, substantially boosting the UK’s offshore wind manufacturing base and creating thousands of local jobs. 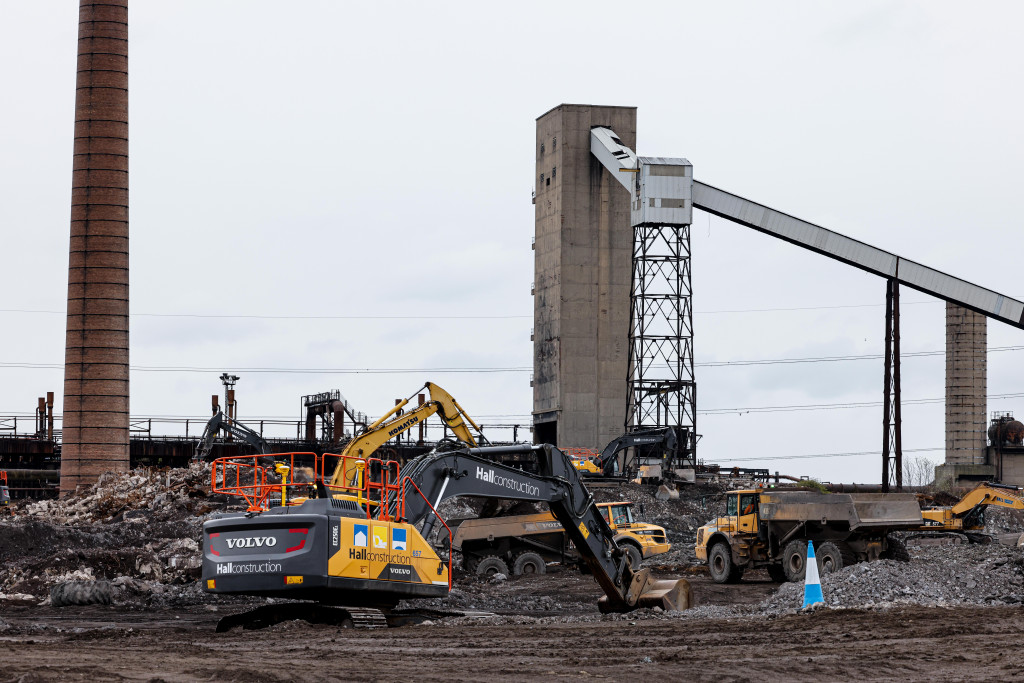