While the previous quarter has been one of significant activity, it has also contained the toughest week in the careers of many of my colleagues, and one which no one should ever have to experience again.

Just 11 days ago, while working on important decommissioning work to help transform the SSI site, an extremely tragic incident took place in which two people lost their lives. Due to the complex and challenging nature of the operation, it took longer than anyone would have initially expected to recover their bodies following the explosion and fires.

We owe it to these two individuals, their families, friends and colleagues to ensure that no stone is left unturned to discover what caused this terrible and tragic accident. We will do everything we can to work with the emergency services and Health and Safety Executive to ensure that’s the case.

In August the Secretary of State for International Trade, Liz Truss MP, visited our region and announced that she was opening applications to create up to ten free ports across the UK. I’ve been pressing for this for a long time, and she recognised we were “ahead of the game” in the process, and that there was a “huge appetite” for a free port in the region.

And in July, we successfully rebranded our local airport back to Teesside International Airport, to much positive coverage. The people of Teesside voted overwhelmingly to change the name back, and I’m proud to have been able to deliver it for them – to a brand that’s known and understood. This, along with the flights you’ll read about below, we’re making good progress on our ten-year plan to restore the airport to its former glory.

Earlier this month, I chose the Tees Valley Mayor and Combined Authority’s first official charity partner, A Way Out. The Stockton-based charity delivers services throughout the Tees Valley and County Durham aimed at improving the lives of vulnerable women, families and young people.

After meeting A Way Out’s Chief Executive Sarah McManus I was at impressed by the contribution they are making to people’s lives in the region. So my team and I will be helping to raise funds for A Way Out and offering practical support wherever we can.

Teesside International Takes Off Once Again 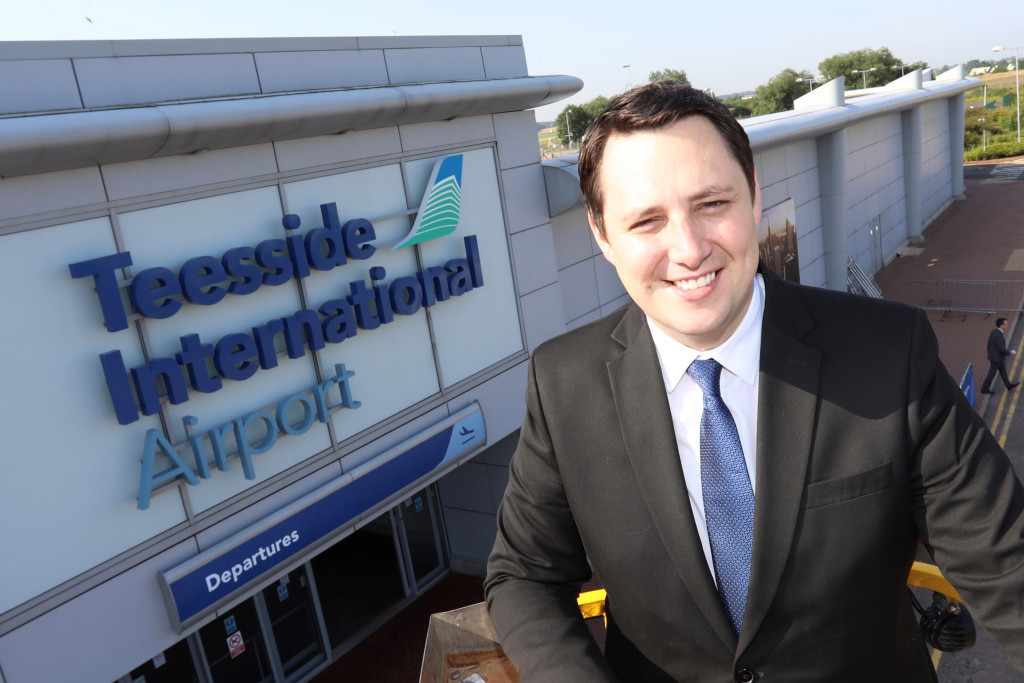 Teesside International Airport is flying once again after the former Durham Tees Valley Airport was rebranded to its original name.

The name was originally changed from Teesside International Airport to Durham Tees Valley Airport in 2004, to the disappointment of many local people. The public voted overwhelmingly (93%) in support of changing the name back in December 2018, choosing its first, and most enduring, name.

The new logo uses the original colours of the airport from before the 2004 rebrand of blue and green, incorporating into the design one of Teesside’s most famous natural landmarks, Roseberry Topping. To ensure value for money, the rebranding and design was done in-house working closely with the airport’s operator, Stobart Aviation.

Since its return to public ownership, the airport has gone from strength to strength. In July it was announced the first flights to Spain for seven years will take off from Teesside next summer. JetsGo Holidays will start operating flights from the Airport to Palma (PMI) in Majorca every Sunday, from 19 July 2020 for ten weeks, the height of the summer season.

To support the rebrand and expansion, in August a new airport website was launched by Darlington agency Hush Digital. The website allows customers to pre-book car parking spaces, and includes a partnership with Skyscanner, to let people search and book for any flight from Teesside to anywhere in the world.

In August, Mayor Houchen joined Secretary of State for International Trade, Liz Truss MP, on a visit to PD Ports during which Government announcement the establishment of a Free Ports Commission.

This will invite ports and airports across the UK to bid to become one of up to ten Free Ports across the country. The Minister also met leaders of local exporting businesses to discuss the potential economic benefit of Free Ports.

The move comes following a 19-month campaign pushing for a Free Port in the region led by Mayor Houchen, which included lobbying Whitehall, inviting ministers to the area and publishing a 100-page ‘White Paper’ setting out how these new low-tax zones would work in the UK.

The Mayor’s 100-page ‘White Paper’ stated that a Free Port in the Tees Valley could provide a net boost of £2billion to the UK economy and up to 32,000 new jobs over 25 years.

Two annual events supported by the Tees Valley Mayor and Combined Authority have been hailed as huge successes.

More than 1,200 students attended the Skills and STEM Event to see the opportunities on offer from saw 75 universities, colleges, learning providers and employers including Sirius Minerals, Able UK and EDF Energy. Middlesbrough Mayor Andy Preston also went along to meet young people from the region.

Two days later, also at Teesside University, Tees Valley Business Summit welcomed more than 1,000 industry leaders, company owners and managers from across the region for a sell-out show. More than 100 businesses exhibited at the summit, which included a welcome by Mayor Houchen and a packed schedule of workshops and presentations.

At the summit, the Mayor also and spoke about opportunities for local businesses at Durham Tees Valley Airport and the South Tees Development Corporation.

An exciting new creative industries development programme has been kick-started with backing from the Tees Valley Mayor and Combined Authority, in partnership with top agency Northern Film + Media.

Tees Valley Screen has been established to provide support to individuals and businesses in the region who work, or are looking to enhance their work, within film, television and moving imagery. Regular networking events, training, and access to industry experts will be held as part of the scheme, providing opportunities for funding.

The initiative is being run from Hartlepool’s new BIS centre and the launch was attended by Cllr Shane Moore, Combined Authority Cabinet Lead for Culture and Tourism. The BIS, the £3million Grade II Listed former Post Office building in Whitby Street, forms part of the wider Innovation and Skills Quarter (ISQ) project that aims to revitalise Church Street and develop a thriving creative industries quarter.

The region has recently played starring roles in a number of film and television productions such as Vera, Victoria and Inspector George Gently, and has featured in Hollywood blockbusters such as Atonement.

The British Film Institute (BFI) estimates that the film industry contributed £6.1billion to UK GDP in 2016, an increase of 20% from the previous year. Tees Valley continues to promote itself as a filming-friendly, welcoming and adaptable place to base productions.

Work to construct a roundabout as part of a £1million South Tees Development Corporation site access scheme has now been completed.

The project, delivered by local construction contractor Hall Construction Services, is the first stage in the delivery of a comprehensive, site-wide transportation infrastructure network to support major regeneration of the area. The scheme will enable access to 350 acres of development opportunity in the Development Corporation, including 1.3 kilometres of river frontage; land which is primed for the first wave of investors.

Completion of the roundabout realises one of three new strategic accesses planned for the 4,500-acre STDC area, as identified in the Master Plan. Redcar and Cleveland Council Leader Mary Lanigan, Development Corporation Project Manager Jeanette Armin and John McCabe from engineering consultancy WSP were on hand for the opening.

This is the first construction project to be delivered by the Development Corporation. It was originally developed by Redcar & Cleveland Borough Council and is being funded through the Tees Valley Combined Authority. In time, it will be upgraded to a Gateway entrance to the STDC area.

The town hosted the Great North CityGames for the first time this year, after having spent a decade on NewcastleGateshead Quayside.

Thousands of residents and visitors lined the streets to watch the games, which also included hurdles, long jump and pole vault. Earlier in the day, the finals of the School Sprints for young people in the region were held, with Stockton Council Leader and Combined Authority Cabinet member Cllr Bob Cook meeting the winners.

The Tees Valley Mayor and Combined Authority were major sponsors of the event, with the Enjoy Tees Valley destination marketing service taking along its branding and flower wall. As at previous events, the flower wall was a success and saw an excellent amount of interaction.

Plan Launched for the Future of Tees Valley Travel

A transport plan outlining the priorities and proposals for the future of travel in Tees Valley has been launched by the Combined Authority.

Cllr Heather Scott OBE, Tees Valley Combined Authority Cabinet Lead for Transport, has unveiled the draft Strategic Transport Plan, which is out now for public consultation and includes £257million of schemes to improve transport in the region.

The plan covers all forms of transport, from roads, rail and air to buses and sustainable travel such as walking and cycling routes. It looks at major themes of national rail, major roads, connecting centres, unlocking key sites, and local journeys while delivering social equity and protecting and enhancing the environment.

As well as detailing upgrades to the transport network to allow people to get around quicker and smoother than ever before, the plan also considers the freight needs of businesses.

Mayor Houchen has applauded the efforts of interns at the Tees Valley Combined Authority at the end of their three-week placements.

As part of the Mayor’s commitment to young people, their career choices and development, nine young people aged 17 to 22, from or studying in Tees Valley, were hired to join the organisation during the summer holidays.

The interns took up roles across different teams, as well as spending time working at Teesside International Airport and the South Tees Development Corporation to give them invaluable experience for their future careers.

They led on projects including a national and local education, employment and skills policy review, social media projects, innovation schemes and identifying the impact of investments and job forecasting. The interns also worked with the transport, culture and finance teams, and on a project to help raise awareness of careers advice for young people and options for school-leavers in Tees Valley.

Since been elected in 2017 Mayor Houchen has supported the training of young people through apprenticeships and internships, with a number of previous interns securing full-time jobs within the organisation. All of the interns were paid the Real Living Wage.

The Chancellor of the Exchequer set out departmental spending plans for 2020-2021 on September 4, 2019. This was a single-year spending round ahead of the UK’s scheduled departure from the European Union on October 31. The Chancellor stated that the next multi-year Spending Review will be carried out in 2020.

Headlines relevant to the work of Tees Valley Combined Authority include:

After the UK leaves the European Union, it will no longer receive structural funding. The Government has pledged to set up a Shared Prosperity Fund to “reduce inequalities between communities” as a replacement to the funding. Although the Government has not yet published its consultation on the fund, the Combined Authority continues to provide feedback to Government on the possible design of the fund.

Government has created a new ‘Get Ready’ public information campaign to inform and motivate the public and businesses to take action and prepare for Brexit. The campaign is bold, simple and instructive and will be highly visible across the UK.

To increase exposure, the Combined Authority has created a portal on our website to direct businesses to Gov.uk/Brexit, which is the single location where audiences can find guidance and the most up-to-date information relating to Brexit.

We will be working with Tees Valley Business Compass on a communications plan to advise Tees Valley businesses on preparedness for Brexit and further increase awareness of the Government initiative and support.